The Prestigious All Assam Students Union (AASU) had been an insignia and had once been a concurrent name to the Aspirations of the People of Assam. The famous Assam Agitation is a testimony to the mutual support that people of Assam had once bestowed on the Students' Union.
Even after betraying the widespread support in Assam for 1951, and signing of the Assam Accord with 1971 as an exclusive cut-off year for the State, people of Assam, still overwhelmed the organisation with the popular vote and installed Asom Gana Parishad (AGP) government twice. Although, the Jatiyatabadi Government failed to deliver, and was ousted by the very people, who had once installed them to the pinnacle of power. The Students Union survived, by skilfully detaching itself from the great Fall of AGP and by amassing protests even against the AGP when and where needed.This Strategy helped the AASU immensely, and kept its popular support intact, even when people at large grew weary of AGP. The growth of AASU as an independent entity throughout the decades had helped it mostly to win college union elections and at times, as an apt pressure group to influence policies. But, the intoxication of these meagre material achievements, made the leadership of AASU to lose sight of the reason for their existence. AASU has truly become a Dinosaur in the Socio-political cosmos of Assam. With a large body and a tiny brain capable only of ensuring its survival, the AASU like the aphorism of a Dinosaur has failed to leave a constructive mark of its existence and has managed to survive only as a reactionary force. 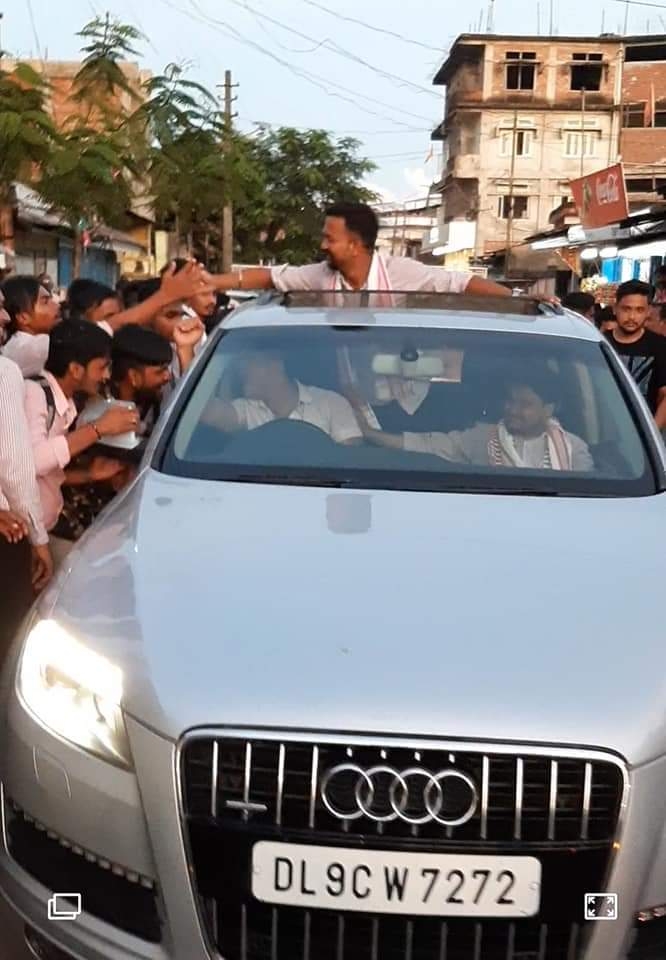 Photo- AASU leadership rallying upto Dougla Azads House in AUDI Care provided by him
The reactionary propensities showcased by AASU can be aptly observed in its decisions. While an impartial analysis leaves us with no doubt that Assam deserves 1951 as a cut-off year to determine citizenship like the rest of India. Interestingly enough, AASU this time remained hellbent on preserving 1971 as a cut-off date to determine citizenship. The entire facade unravelled in such a manner that, the AASU leadership seemed to have assumed the role of Indira Gandhi and Rajiv Gandhi, while the general public took the stand of AASU in the '80s and demanded 1951 as the cut-off year. 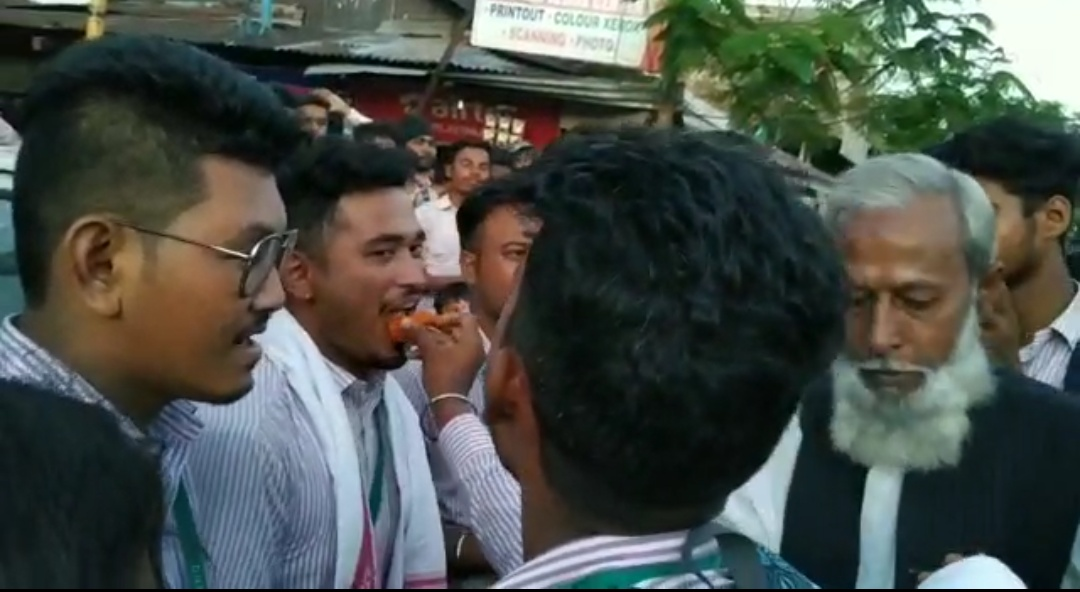 Photo- AASU leaders accepting felicitations from Tazia Carnage Mastermind Dougla Azad Khan
The reactionary character of AASU was further evident in the Anti-CAB (Citizenship Amendment Bill) protests. The Urban Naxals had deconstructed the entire narrative around CAB in such a manner that, the persecuted Hindu migrants from erstwhile Islamic states of East-Pakistan later Bangladesh were demonised as a significant threat, and the century-old Institutionalised Muslim Immigration into Assam valley was made a non-issue. Yielding to the narrative set by the Urban Naxals, AASU lacking introspection, vehemently opposed CAB without any credible anecdotes and analysis to support it. The spirit in which the Students' Union fought CAB, it gave away an impression as if CAB was an Assam specific bill, rather than a National Bill and if the social fabric of Assam was in grave danger from Hindu and Buddhist refugees rather than Islamic fundamentalists.
AASU, which is void of literature and ideology and is committed only to reactionism, also, lacks an intellectual aptitude to deal with issues and hence at times have caused only distress to the Society. Claiming to be a watchful guardian of the greater Assamese community, it has failed to take up issues that actually needed intervention and awareness of the Society at large. For that matter, it has been observed that the Students Union, which jumps out with placards and torches on every other random event, has remained connivingly mum to issues affecting the soul of the Assamese Society, the Sattras.Perhaps, the lack of depth to understand matters of national importance and fake secular narratives, followed by intellectual bankruptcy, prevalent in the secular Students union has kept it in the bay and has forced it to dodge the issue of encroachment of Sattra's. As the encroachers, in this case, are Muslims, the AASU leadership has avoided this matter wilfully, as most of their cadre base and financiers are made up of wealthy Muslim families. 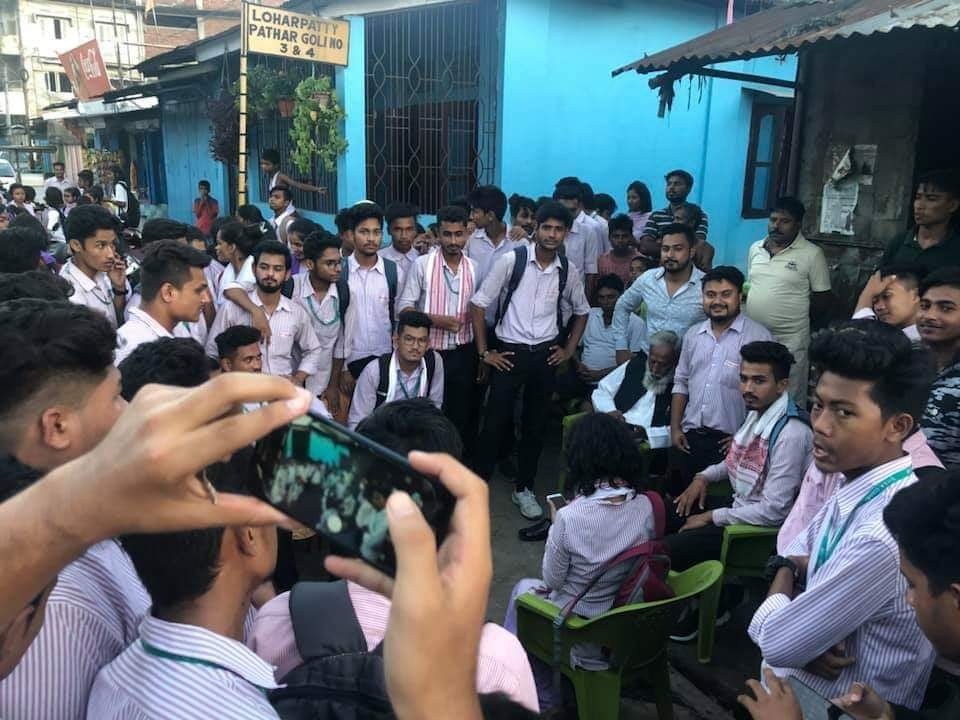 Photo- AASU leaders with Dibrugarh Tazia riot mastremind Dougla Khan
Recently, the Tazia Carnage that ensued in the little known town of Dibrugarh following the Muhharam celebrations shocked the conscience of the entire country. But, this time too, the AASU maintained a spectacular secular silence. While every sane human across Assam was condemning this dastardly Tazia carnage, AASU leadership was nowhere to be seen. On a first glance, the entire stand of AASU during the Tazia carnage in Dibrugarh seemed like a classic case of apologetics attitude to Islamic fundamentalism. But a more in-depth investigation revealed a dangerous plot, that shooked the conscience of our research team. 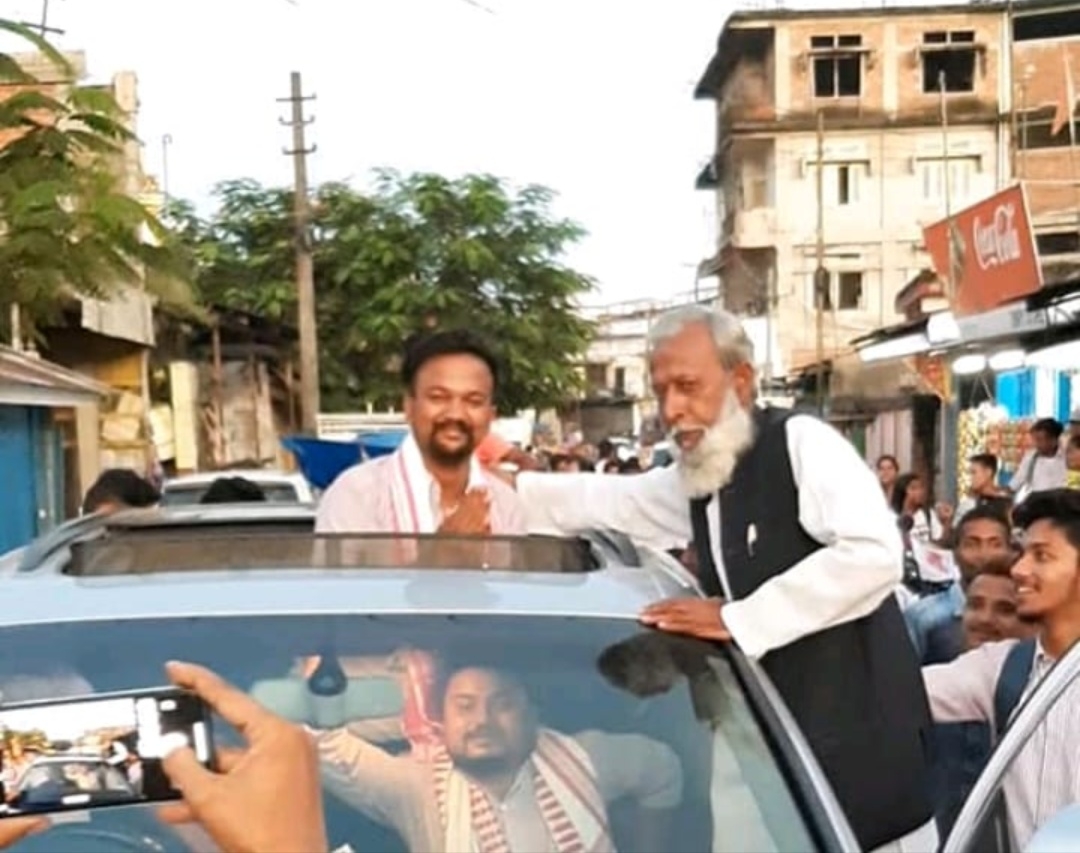 Photo-AASU leaders bowing down to Dougla Azad, while riding on the Delhi Registered high end Luxury Audi Car
The All Assam Students Union, which is expected to be steadfast for people of Assam were seen taking benefits 'in-kinds' from the masterminds and jihadist elements, who had executed the entire Tazia Carnage. It became evidently clear, why AASU kept itself at bay from condemning the Tazia carnage? The source of their lavish expenditures that its unit made during the Dibrugarh commerce college elections was also exposed. It is was so terrible to discover that AASU took money from a Jihadist criminal named Dougla Khan, who was arrested by the Police for masterminding the entire Tazia Carnage of Dibrugarh. Videos of AASU members riding in Delhi registration AUDI cars and rallying up to the residence of Dougla Azad and cheering and thanking him suffices the allegations with ample proof 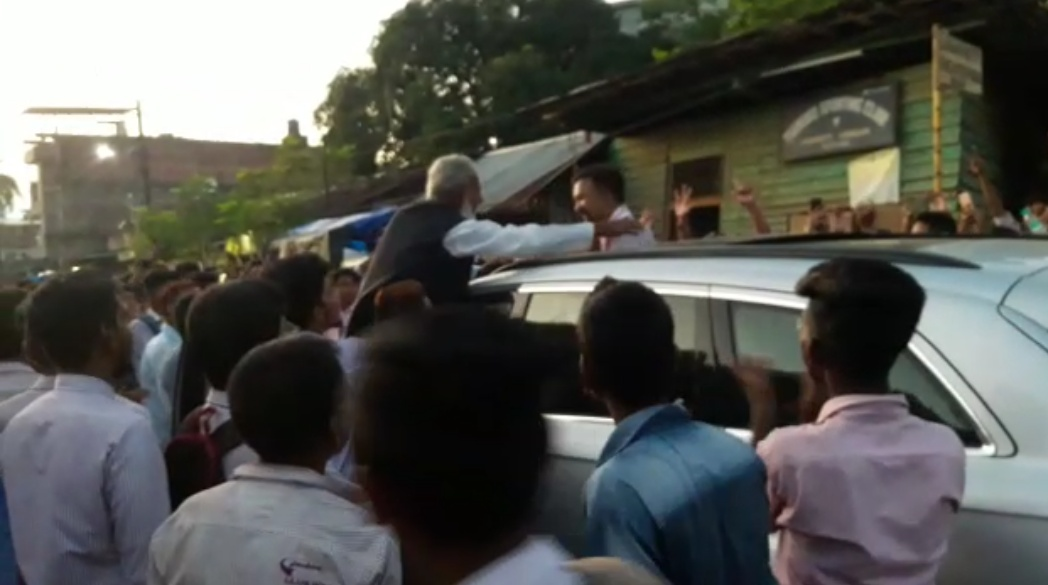 The great fall of AASU is evident, and it significantly resembles the work and spirit of JN Mondal and his organisation, who betrayed his own people and sided with the Muslim League for temporary material achievements and artificial narratives of Secularism. What happened to JN Mondal and his organisation in the later years is something that at least the AASU leadership should study and contemplate upon. While they are free to go on a suicidal spree by joining hands with jihadists to win meagre college elections, but, they don't have any right to play with the safety, security and future of the Assamese Society.
Tags: