'Dharma' is perhaps the most intense word to be ever realised by our Civilisation. The word Dharma may also be the most difficult to explain, yet, inherently followed by the most. Our Civilisational enigma had been full of such treatises, that have interpreted it in many ways. However, its essential fundamental qualities had remained the same. It is something like the water, which expresses itself in many forms but fundamentally remains composed of the same life-giving properties, upholding and sustaining life.

His Holiness(HH) Swami Chinamayanada, had once splendidly explained 'What is Dharma'. 'HH' Swami Chinamayanada, using the example of sugar had demonstrated, how, although it came in many types, like brown sugar, white sugar, powdered sugar and even crystalline sugar, yet, all its types retained its essential quality of being sweet. Hence, putting it simply, it is the Essential Property of sugar to be sweet; thus, the sweetness is its Dharma. Similarly, to burn and emit heat is the Dharma of Fire, and it is its essential property that signifies it be a Fire. 'HH' Swami Chinamyandas explanation leaves no room for doubt to realise What is Dharma.

Dharma is a macrocosm in itself, encompassing the vital properties that uphold the creation and sustains it as a mother protects her child. As for our Indic Civilisation, the concept and practice of Dharma had been eternal, and more egalitarian than the modern parochial constructs of Equality, Secularism, Liberalism etc. Our Civilisational history traces the existence of Dharma even before kings, kingdoms or lawmakers as an entity came into existence.

In Shanti Parva of the Mahabharata, it states about a time,

Hence, we can aptly presume that Dharma is a set of divine laws, which are eternal and are naturally present among us, and that upholds and sustains us to conduct our sacred obligations towards the entire creation. These fundamental roles which we presume in our lifetimes are bounded to us by a divine sense of duty; hence, a sense of sacredness prevails among all to uphold it even at the cost of great personal sacrifices.

An exemplary anecdote from chronicles of our civilisational history beautifully and explicitly showcases the position that Dharma had commanded in our society, in our Dharmic past. The legend of Manuneethi Cholan, known as the Just king of Chola Dynasty in the ancient kingdom of Chola Nadu goes like this;

Once while carelessly riding his chariot, the prince and Maharaja Cholan's son, Veedhividangan ran over a calf that instantly killed it. As the Chronicles record, the Just Maharaja Cholan had a large bell in his courtyard, and anyone seeking Justice had to ring the bell, to which the Maharaja would humbly attend to their distress and deliver them Egalitarian Justice. It is recorded that, the mother cow, whose calf was killed under the wheels of the prince chariot rang the bell of Justice. When upon enquiry the Maharaja came to know about the episode, the judgement that followed remains as an immortal record of the moralistic superiority that was once inherent to us all. The Maharaja ordered his soldiers to arrest the prince and punished him to death in the same Way in which the calf was killed.

The incredible precedence of upholding Dharma that Maharaja Manuneethi Cholan had set is something that is far more superior on any given day, than the superficial rights bestowed by a compartmentalised society. Dharma, which are laws bound by a sense of duty, is far more virtuous than modern forms of the law enforced through rights. While the former are natural laws, divine in nature, and inspires a sense of participation. The later, lacks divinity, are Prejudiced and needs various appendixes to enforce it through a sense of fear.

Dr Sankar Dayal Sharma, the ninth president of India, also had once beautifully explained the role of Dharma. On 25th September 1993 at Bangalore, Dr Sharma, while addressing the first Convocation of National Law University very aptly stated the purpose of Dharma, quoting a verse from the Mahabharata Verse-58 in Chapter 69 of the Karna Parva he said;

"Our dharma is said to be `Sanatana,' i.e. one which has eternal values; one which is neither time-bound nor space- bound. It is because of this that Rg. Veda has referred to the existence of `Sanatan Dharmani'. The concept of `dharma', therefore, has been with us for time immemorial. The word, Dharma is derived from the root `Dh.r' - which denotes; `upholding', `supporting', `nourishing and `sustaining............Dharma is for the stability of the society, the maintenance of social order and the general well-being and progress of humankind. Whatever conduces to the fulfilment of these objects is Dharma; that is definite".

There are three primary sources of Dharma, of which the Veda's occupy the highest authority.

Furthermore, if ever any doubt or conflict arises among the three sources, it is the authority of the Vedas that would be triumphant overall. Dharma is divided into two broad classifications; one being the Raja Dharma or the Constitutional Duties to be observed by the king, and the other being the Vyavahara Dharma which constitutes the Civil, Criminal and Procedural Laws. The Manusmrirti, which is the first scripture of humankind to have codified the Laws or Dharmic codes of Conduct for Humanity, announces a very egalitarian predicament for the kings called the Raja Dharma to observe, it states:

"It is the Dharma of the King to protect and provide for his subjects as the mother earth upholds and nourishes every creature without distinguishing or favouring one over the other". I;e when are still arguing for Equal rights of women from all communities, rights of Animals etc., the Manusmiriti had declared it as the dharmic duty of kings to preserve and protect every creature, beyond the realms of favouritism.

Now, if we try to draw a parallel with the modern hindsighted parochial constructs of Universalism and liberalism, it will be a grave injustice to the cause of Dharma. In contemporary times, as a fall out of the constant monotheistic rendering of our Civilisational philosophies, we have somewhat lost our abilities to differentiate between our Dharmic and Adharmic moorings. We have further parochialized our understanding of the Philosophies, and one such example is of the shloka "Vasudhaiva Kutumbakam." that gives us a sense that the entire universe is our family. However, the complete Sholka is very different and inspires us to aspire for a global fraternity, but at the same time, it also cautions us to elect and understand who qualifies for the worldwide fellowship carefully. The complete Shloka states as follows;

i;e, only those who are beyond the binaries and who can realise the inherent oneness among all are qualified to be treated as a global fraternity, thus a true Vasudhaiva Kutumbakam.

Moreover, we can interpret it as Dharmic Coexistence only with those who believe in mutual Coexistence without attempting to transgress our civilisational values and ethics. Otherwise, it will be a suicidal attempt of establishing an artificial harmony with our aggressors. The narrative of ill-defined secularism and minorityism that has developed into apologetic appeasement is a perfect example of the 'otherwise' caution.

The Dharmic past still resonates in the popular psyche of this contemporary yet ancient Civilisation. Although owing to repeated onslaughts from the invaders, we have lost our ability to understand our Dharmic moorings, but all is not lost. Perhaps, it is for this reason that the pioneers of our Constitution had inserted Article 44 of the directive principles of state policy, that directs the states to secure a uniform civil code for the citizens. It was due to this intrinsic understanding of Dharmic Equality, which inspired the sub-committee on fundamental rights of the constituent Assembly to include Uniform Civil Code(UCC) as a justiciable fundamental right. Initially, UCC was named as Draft Artcile 35 and was put up for a discussion in the Constituent Assembly on 23rd November 1948. While most of the esteemed members of the Constituent Assembly expressed their opinion in support of UCC and stated

"One of the factors that have kept India back from advancing into nationhood has been the existence of personal laws based on Religion which keeps the nation divided into watertight compartments into many aspects of life. We are of the view that a uniform civil code should be guaranteed to the Indian people within a period 5 to 10 years."

On the other hand, Muslim members adamantly opposed it with their entire might. Mohammad Ismail Sahib, Naziruddin Ahmed, Mahboob Ali, Baig, B Pocker and Hussain Imam were some who took the lead against UCC. They even tried to equate the implementation of UCC to the violation of their religious beliefs. Interestingly enough, in doing so, they never hesitated to the fact that they were, in fact, the violators' of the ethos on which the Independent Republic of India Stands. The continuation of biased Personal laws based on religious principles defeats our very purpose and further complements the continuation of a subtle form of the Two-Nation Theory.

While the Islamic Republic of Pakistan manufactured as an Islamic state, Strangulates and discriminates its citizens in the name of Religion, we, on the other hand, want to free our citizens of the binaries that dictate rights according to religious moorings. It is essential here to understand that our modern Constitution serves us in place of the Raja Dharma, and hence it must treat every creature with the principles of Equity. Subsequently, a critical mind can't restrict itself but to attempt out and seek, whether the Uniform Civil Code will serve our purpose or we need to think on a new paradigm of Equity Civil Code. While UCC inspires uniformity, Equity, on the other hand, inspires fair and equality while taking into consideration the strengths and weaknesses. The recent announcement of the Modi government to introduce 10% reservation to economically weaker sections can be a point of reference to start our discourse on whether UCC or ECC. Here, the Modi government had not effectively abolished reservations but had created equitable opportunities for the economically weaker section to have a generous benefit from Reservations. 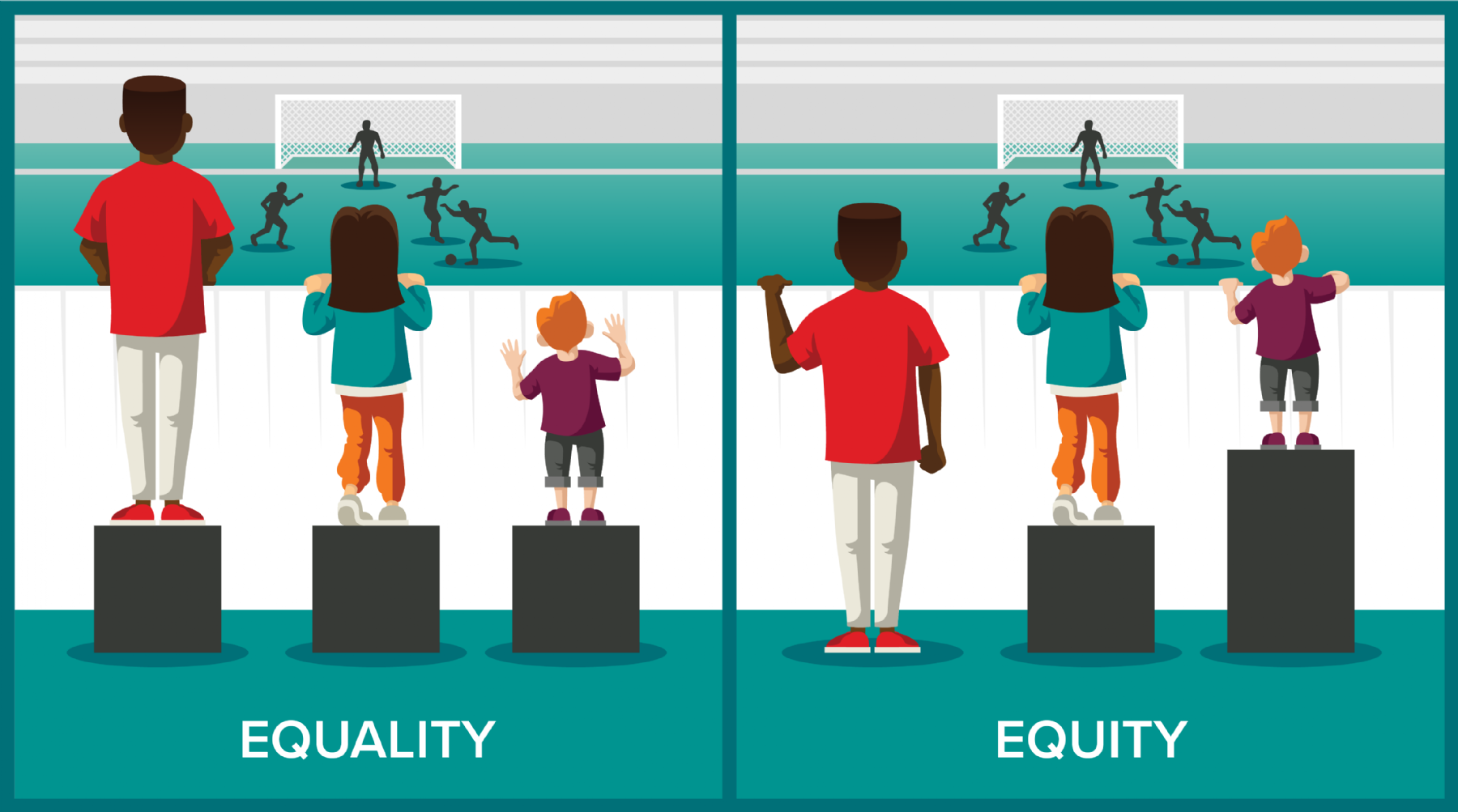 Whether we arrive at Uniformity or Equitability, it is important here to reiterate that it is an unfulfilled Dharmic duty that we, as a civilisation, need to realise and fulfil at the earliest.