The Nation Society of India stands at a very delicate phase in history. Where, on the one hand, it has an opportunity to undo all the wrongs inflicted on it for centuries and usher into an era promised by visionaries like Swami Vivekananda to Rishi Aurobindo, or it can choose to remain unattached and do what it does best, blame the fate. The propensities displayed by the Nation Society of India has remained more or less the same throughout the history, where we expect our leaders to do everything while misplacing our priorities and ignoring the real duty in hand. Be it the case of Invaders destroying the Somnath temple with a handful of dacoits, while most of it remained meagre spectators of the carnage or in the case of British colonialists where it aided and helped the colonisers to win over other Indians. Our history stands testimony to our fallacies. 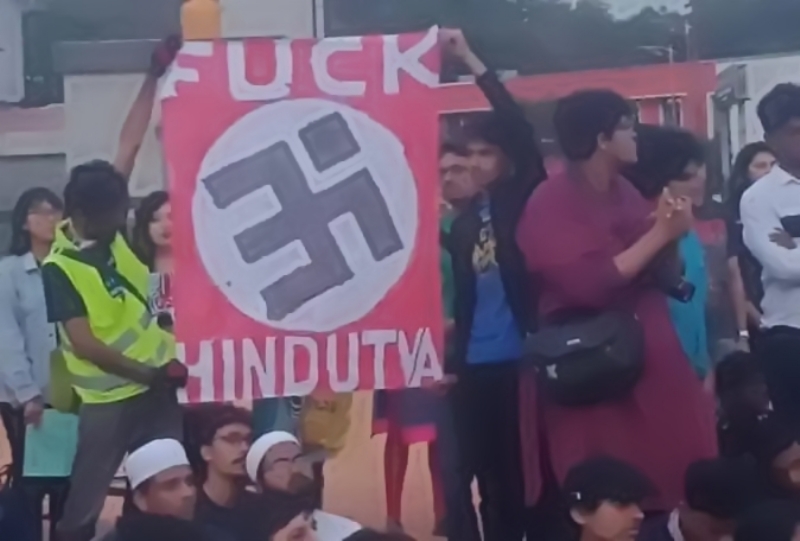 (Source: OPIndia: Anti-CAA protestors blatantly showcasing Hindu phobia and distorting and equating the most revered symbol of Hindus to a Nazi symbol)

The Nation Society could not prevent the partition of its Ancient Motherland. Neither could it make a stand to save its brethren in Kashmir nor is it making an active gantry now to help those who are being forced to flee into the remaining lands of our once undivided motherland. We choose to remain gullible, and we decide to stay naive in spite of all the signs that indicate our misplaced priorities. We have seen our National Society being forced and displaced within our modern state boundaries, we have seen incidents like that of Kairana, where changing demography forced an entire community to flee. We have seen the case of Assam, and we are witnessing Jharkhand. We have remained Mute to the Red threat; we are still displaying selective amnesia to the recent call by Indian Union Muslim League for a separate state of Malabar. We choose to be Voiceless.

The state of stupefaction that keeps us in an animated state of Secularism prevents us from realising the happenings during and after the Bengal partition. The historians at Jadavpur University remain unaware of the Direct Action day or the great Kolkata killings, as named by the left intelligentsia, for they must have seen something great in the entire facade of rapes, genocides and loot of the Nation Society. The Stupor takes under level when the left whitewashes the Great Kolkata killings( as named by the Left) as an economic uprising of the oppressed against the oppressor. However, what the Left skilfully avoids is, explaining their intended definition of the oppressed. Firmly tied to their moorings of profound hatred towards the NationSociety, the terminology of the 'oppressed' remains reserved for only those who can kill, maim and destroy the adherents of the Nation society.

Be it NRC, NPR or CAA, whatever minimum awareness arises in the Native Society for its long destitute brothers, the cohorts of the monotheistic world employ their tacit techniques to mislead and intimidate the plural Native society from lending a shoulder to their long-deserted kiths. The Troika of proselytisers, jehadists and the Naxals although form meagre minority, yet, they form a toxic triangle capable of creating the 'Chakravyuh' of Delusion, Dissolution & final Destruction of the Nation Society and its Native Culture. The Nation Society today, more than anything else, and more than good roads and cheaper onion prices need to secure its future in its surviving native Land.

While it is great to have higher morals of universalism, liberalism and a knack to see goodness and Godness even in poisonous snakes, yet we have to be vigilant and adequately cunning enough to avoid getting stung by the venomous snake and die an unfortunate death. The rules of universalism deeply imbibed in our thought process have also provided us with rules for engagement while displaying Broadmindedness. For e.g., If a tiger shows higher morals of universalism and tries to befriend a poacher whose sole purpose is to kill its soul and harvest its skin. Then the owner of such a twisted yet higher morale is bound to meet a violent end, and with it, end of his higher moral.

The Nation society has to make a call, a call to unite and voice its opinion strongly, with a public display of affection for its destitute Kith and Kin and make a stand for what is right and what needs to be done. We stand at a critical juncture of history, where it is pressing us to sacrifice our lethargy, our inaction, and dismantle the fake propaganda that is gaining momentum because we have ceased to be heard and chosen to be cosy in our comfort zones. This is a time when the National society has to make a stage, reach out to others and inspire the perplexed to make a stand and secure our future or remain a mute spectator as we had when the Somnath had fallen or when Ayodhya was violated. What will we choose?