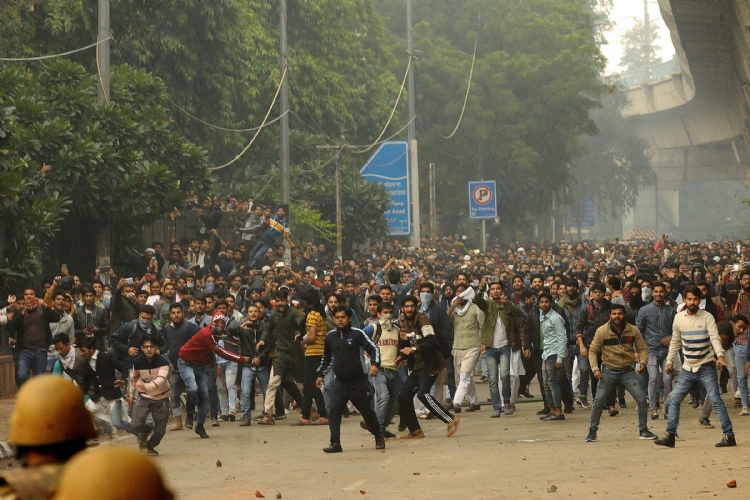 The CAA protests have clearly defined how detached from reality the majority of our fellow urbanised Indians are. The protests in India that were largely led by students from a handful of Universities exposed their addiction to sensationalism as well as their lack of knowledge of history and current affairs.

Students with spare time, ambitions of entering politics and a severely myopic vision towards the idea of a “just and fair” India took to the streets of Indian cities. The majority of student protestors were from institutions that are known more for their protests and activism rather than for producing an award-winning international standard body of work.

When I first saw the Jamia Milia Islamia University protestors, it took me by surprise. The first thought in my mind was where are they walking to in the middle of South Delhi? How have they ensured that no miscreants and anti-national elements join the protest as it could become dangerous? But most importantly, have they read and understood the Citizenship Amendment Bill? The CAB was proposed to give a handful of minority refugees (Hindu, Christian, Parsi, Jain, Sikh and Buddhist) from Afghanistan, Bangladesh and Pakistan living in India for decades, Indian citizenship. This excluded Muslim refugees as Muslim refugees could not be religiously persecuted in these three countries as the countries were Islamic. Nevertheless, they could apply for citizenship through normal channels. What was there to protest?

However, by the evening, the answer was clear. Majority of the protestors had not even read the bill and as it included the words “citizenship and amendment” they thought a bill had been passed to expel Indian Muslims. Public property was destroyed, buses set on fire, hateful slogans declaring Khilafat 2.0 were painted on public walls and the police were attacked and intimidated. To a civilised society, these were not students, and if they were, there was something seriously wrong with their sense of boundaries.

This reminded me of a time I was involved with the Student’s union at my University. I happened to study in some of the finest universities in the United Kingdom. I also actively participated in not just academia and sports but was also a part of the largest Student’s union in the country. I for two consecutive years was elected not only Asian Society President of my Student’s union but also their Equal Opportunities Officer. I tackled various sensitive issues. It was also a fact, unfortunately, that the area that our student housing was located in was notorious for its racial attacks. A coloured student of the University was beaten to death, and there was a strong suspicion of authorities supporting the perpetrators every step of the way. As students, of course, it angered us and instilled a desire in us to change the world. Still, we never took to the streets, we never envisioned in our wildest thoughts that destroying public property would be a good idea or acceptable let alone by the authorities but also by our families, we didn’t own spray cans to deface what was not ours, nor did we walk around with bricks and stones, we followed the matter closely and extended all our support, but there would never have been an instance of violence that would have been tolerated by the University or by the authorities. We knew this.

Maybe, these students don’t know how much they get away within India. Try throwing a stone at a police officer in the United States of America or in any other western country; the chances are you will be shot dead. What India saw was aimless young people who did what they did because they could get away with it. They cried foul when our underpaid, understaffed and undertrained police officers retaliated and thought unfair when they were reprimanded. Protest organisers did not demarcate rules of protest neither did they bother reading and understanding IPC section 96-106 of the Penal Code which states the right of a person to defend himself even if it means firing at the attackers in self-defence. Therefore, when a mob starts attacking and pelting stones it is the right of every police officer to be able to protect himself. Protests are not just organised by giving fiery speeches. Protests have rules that must be adhered to and there are consequences if you don’t. Just by the virtue of being students, the law does not hold you above itself. Anti- CAA protestors did not protest responsibly, ethically or maturely. When you don’t take into consideration the personal dangers as well as the security of your protests, your city and your University from anti-national elements but more importantly you do not take cognisance of the true cause of the protests, the results can never be fruitful.

However, after violence erupted, strategically to add to their declining credibility as responsible protestors they brought in the brightest minds they could find to lead the anti CAA protests. The likes of JavedJaffery – a dancer and small-time actor, Farhaan Akhtar- a mediocre actor and a painful singer, Swara Bhaskar- a self-confessed leftist with leanings that are solely based on her anti- BJP sentiment, leaving their trump card for the last, they finally brought in Arundhati Roy. The messiah for all pseudo secularists and the luckiest woman I know. A one-hit wonder, she many years ago won the highly coveted Booker Prize for a fairly well-written book. Armed with a pretty face, a gentle voice, fluency in English and a fat bank balance she set out to be the champion for all causes that were for some reason more anti- BJP than case-specific.

In what was a show of defiance against the future plans of the Government of India we saw Arundhati Roy spew venom against the democratic systems of this country. Joining a protest on Indian soil, you could see Arundhati changing the narrative. What began as an anti CAA protest mysteriously transformed into a protest against National Register of Citizens(NRC), Citizenship Amendment Act (CAA) as well as the National Population Register(NPR) combined. She spoke less like a prize-winning author and more like a common rabble-rouser. She encouraged her coterie of young star-struck students to lie to the government. Shockingly and unethically, she invoked the horrendous memories attached to the names Ranga and Billa. The monstrous men who murdered and raped two young siblings, changing the way we look at Delhi’s safety and security forever.

Many young protestors may not know who these men were as they were not born then, but Arundhati has no excuse for being so crass. Children of a naval officer Geeta was 16, and her brother Sanjay was 14. They were kidnapped by Ranga and Billa, tortured and hacked with a sword. Geeta was most probably raped. Unfortunately, by the time their bodies were found, they were so badly decomposed that evidence collection was difficult. Ranga and Billa were hanged in 1982. Their families never claimed their bodies out of disgust and shame. But Roy had no such conscience weighing heavy on her. She thought it was acceptable to ask young impressionable minds to adopt their names. She asked these students to not cooperate with the NPR exercise and give their names as Ranga and Billa – really Arundhati? These are the names you want to hide behind and wage your war against a democratically elected government?

For her, it was for just another round of applause and laughter. On the other hand, I shudder to think what the victim’s families must feel hearing the names of Ranga and Billa being used today as a heroic gesture. And if Arundhati genuinely harboured such deep concerns against these government exercises why did I not hear Arundhati Roy speak up against the NPR or the NRC when they were exercised and passed under the UPA government?

She further asked the student protestors to give their address as 7 Race Course Road. Firstly, Arundhati the Prime Ministers residence is no longer called 7 Race Course Road, it is 7 Lok Kalyan Marg, and secondly, the government officials who have come before to your house for the NPR will come again without a doubt, and you will give them the correct address, name and any other details they require. They are not your personal staff whose time you can waste, and neither are they daft to not realise that your home is certainly not Lok Kalyan Marg.

And finally, remember the multiple times Arundhati has had to issue an apology for lying? The most hypocritical was when she shook the nation's conscience and relayed the gruesome story of Sayeeda, told to her by her extremely distraught nameless friend from Baroda. Sayeeda had apparently been caught by a mob, and her stomach ripped during the Godhra riots. When the then MP Balbir Punj was shaken by the story organised for the Gujarat Police to take in her complaint and identify the victim, Arundhati shamelessly retreated asking her lawyers to respond by stating that the police had no right to summon her to ask her questions regarding this case. The story was fictionally written in gory yet exquisite English, a figment of her ambitious imagination. Ehsaan Jaffri’s daughters being stripped and raped was yet another fabrication from Arundhati’s house of horrors – the daughters were found well settled in the United States of America. But the one story that will forever separate Arundhati from the great reformists, activists and freedom fighters this country has produced was her display of hypocrisy during the Narmada Bachao Andolan. The Supreme Court had fined her RS 2000 and sentenced her to a day in Tihar Jail for contempt, if she had refused to pay the fine she would have to stay in jail for three months. Arundhati, the messiah of the voiceless was out in a day. According to newspaper reports, she explained: “To take it further would be to make myself into a martyr for a cause that is not mine”.

Well, Arundhati I hope the protestors who you are supporting today know that you may or may not become a martyr for the cause depending on how hot, uncomfortable and smelly the situation becomes. That you may have the money and influence to fight charges of sedition levelled against you, but these poor student protestors may not have the same privilege. That your deep-rooted hate is not for the CAA, NRC or the NPR, your hatred is for the BJP, and this façade of activism is to mask your intentions. Finally, may I suggest a title for your next book taking into consideration your vivid imagination – The God of fraudulent things.

And as for the young protestors of India, you have time, energy, passion which is commendable, but do you have the moral courage to accept that the damage you have done to the nation could have been avoided? You brought in people with dubious intentions to the forefront, and you allowed them to take these protests to a new low. You did not segregate your hate for the ruling dispensation from the rationality of the bill. You further let protestors destroy public property behaving less like educated people and more like hooligans. You allowed anti-national elements to take advantage of your protests. You did not ensure that the correct understanding of the bill came through to all that were participating; instead, you turned it into a religious war. This was not a Hindu vs Muslim issue; this was a refugee issue. Refugees who had already made India their home for the last five decades. Refugees who for once had a chance to live a life of freedom that you take for granted, but because of you, they live in fear once again. Today, the responsibility of their safety in this environment of hate lies firmly on your shoulders.

(About the Author:- She is a Delhi based research scholar with vast experience of ground research in North-East India. She has authored scores of Research Papers, Articles, Intervention Papers and books on NE conflicts, Insurgencies, Socio-Political and Cultural issues.)