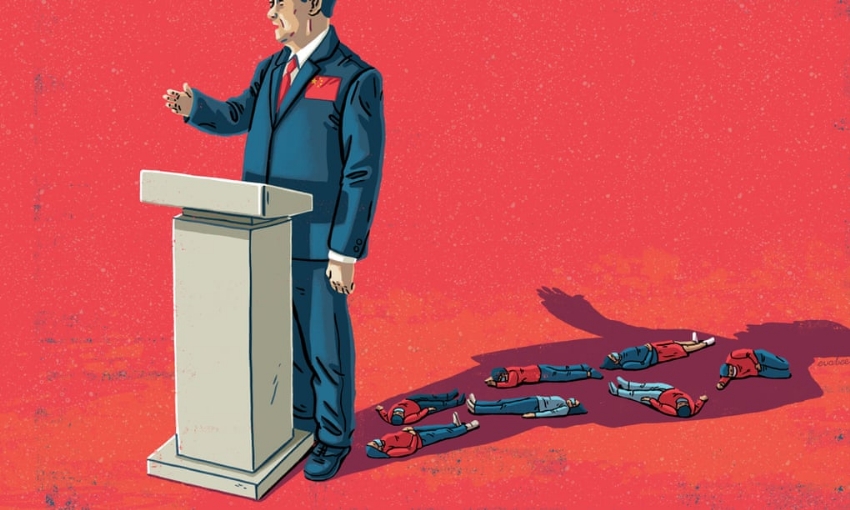 The Communists, like all other proselytising religions, operates with authoritarianism and shun diversity in opinions at par the standards of blasphemy. Just as the papacy governs a theocratic state, the communist countries govern through their party structure without any scope for democracy in thought and expression. Anything that has not been endorsed by the papacy is perceived as a potential to undermine the authority of the papacy and is treated as heresy. Similar trends were seen when Dr Li Wenliang Bill violated the gag order imposed by the Communist Party of China(CCP) and apprised the world about the hazards of the China Virus and became a heretic for the CCP.

The reaction that followed after Dr Li's disclosure has been best described by Nicholas D. Kristof of The New York Times as "act decisively they did—not against the virus, but against whistle-blowers who were trying to call attention to the public health threat". (Shadi Hamid, The Atlantic, March 19th, 2020). The Chinese scientists had identified the pandemic nature of this Virus, as early as, December 2019 and had informed Beijing by January 3rd. Yet, the regime muzzled this critical information and ordered the destruction of all samples. Thus, concealing from the global fraternity about the seriousness of the disease (Sara Dorn, New York Post, February 29th, 2020).

The Authoritarian communist regime remained invested in their propaganda and ignored every healthcare guideline to be followed in case of such epidemics; they went ahead to organise world's most enormous pot luck dinner banquet that witnessed a gathering of more than 40,000 families. What they did is suspicious and seems, as if, the Communist regime aspired for the Virus to spread in Wuhan, as they issued around 2,00,000 free travel tickets to the public amidst the looming threat of the Novel China Virus(Fu Yu, The Diplomat, January 31st, 2020) followed by 5 million people travelling out of Wuhan till travel restrictions were finally imposed(Quentin Fottrell, January 27th, 2020). Whether as part of a deliberate attempt or utter foolishness of the regime, the CCP gave the world its first epicentre for the pandemic. The CCP owes the world an apology, and the world also deserves a redemption, for such authoritarianist structure, has not only endangered the lives of Chinese citizens alone but of the entire humanity.

The CCP that performs as the papacy for the present authoritarian state of China has developed an extensive clandestine network that works exclusively behind the scenes to stifle free voices within China and even outside its territories. This Cabal, being a tool of the Communist regime, works beyond the bounds of accountability and most of the times, work spontaneously without egalitarianism. Other whistle-blowers also have endured the fate of Dr Li and is not a maiden communist's tactic and are instead, a tried and tested methods of smothering free voices.

The world remembers the heroic tale of two doctors in 1990 namely, Shuping Wang and Gao Yaojie who had to face persecution and subsequently flee to US seeking refuge for exposing the illicit sale of Blood and consequent AIDS crisis in Henan. Similarly, another activist by the name of Tan Zuoren also faced persecution from the communist regime for exposing a massive corruption scandal in 2008, involving the collapse of school buildings during the Sichuan earthquake(James Palmer, Foreign Policy, February 3rd 2020). The regimes memoir is filled with blood-stained episodes that relics the brutal suppression of free voices.

While the global fraternity is busy finding ways to save its citizens from the China Virus, the Communist regime is busy seeking retribution from its citizens. Taking advantage of the quasi martial Law prevalent across China, the regime meted out a 10-year jail term to Hong Kong's Causeway Bay bookseller Gui Minhai for publishing books that reportedly embarrassed the regimes aristocracy and was abducted from Thailand by CCP agents in 2015. Similarly, two more people namely, Xu Zhangrun, a professor of law at Tsinghua University and Xu Zhiyong, a human rights attorney, suddenly disappeared in February after criticising the communist government for mishandling the epidemic. But, perhaps the most directed attack against CCP came from within the party ranks, when Ren Zhiqiang, a Chinese tycoon and a party member wrote an article commenting on Xi Xinping as "a clown who insists on remaining an emperor despite the fact that his clothes have all been removed". The article received a broad audience in social media before being abruptly removed, followed by the disappearance of Ren Zhiqiang (Dr Willy Wo-Lap Lam, Jamestown Foundation, April 1st, 2020).

The suppression of the Chinese civil society by the tyrannous communist regime over the years is creating discontent among the intellectuals, free thinkers and youths. Emancipation of the Chinese civil society is long overdue and in the coming years can see more coordinated efforts with the help of global powers to deliver the innocent Chinese from the Red Tyranny. Perhaps the path paved by the recent US endeavour of recognising Taiwan can be the right way ahead, and by recognising Taiwan, the world can appreciate the true Chinese spirit.

CCPs entire existence is dependent on the propaganda machinery, and the regime had begun its endeavour of buying suitable tongues for its global propaganda platforms very early. It gives an impression as if, the Communist regime was preparing well in advance for the hit that it was about to receive after the China Virus epidemic (Louisa Lim & Julia Bergin, The Guardian, December 7th, 2018). Apart from deploying an array of foreign Journalists to change the global narrative of being a source of the Virus to becoming a saviour that delivered the world from the Virus, the CCP has deployed its second line strategy of spreading misinformation regarding the origin of the Virus. The Communists Party is employing conspiracy theories to create an illusion regarding the place of origin of the Virus. Chinese foreign ministry spokesperson, Zhao Lijian recently took to the twitter for propagating a hypothesis that the Virus was a biological weapon developed by the US military and bought to the city of Wuhan during the 2019 Military games.

Nevertheless, even after spending millions of dollars on propaganda, the CCP has failed miserably to gain the trust of its civil society or of the global fraternity. Moreover, in the process of using monetary influence to bend narratives in their favour, the communists have destroyed the legitimacy of institutions like the WHO and have cost humanity a pristine institution of excellence. The WHO towing the lines of CCP propaganda was so evident that it prompted the Deputy Prime Minister of Japan, Taro Aso, to call it 'China Health Organisation' rather than the World Health Organisation(ANI, April 4th, 2020).

Instead of an apology that communists should have made to the world for their crimes against morality and humanity, the CCP is investing in propaganda and mudslinging. Hence democracies of the world need to come together and stop the CCP from harming the world further. The US senators, Tom Cotton and Josh Hawley, have shown exemplary precedence by introducing the Li Wenliang Global Public Health Accountability Act that will be a milestone attempt to make CCP accountable for exposing the world to the China virus. The bill, when passed, will provide the US president with tremendous powers to sanction Chinese officials and thus setting a precedence for other countries to hold China accountable for the mess (Gravitas, WION, April 4th,2020).