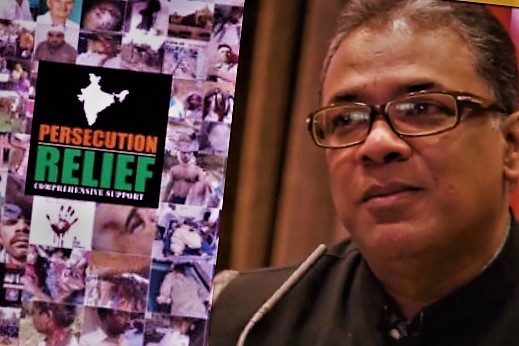 Conspiracy theories are something we all have heard about, be it against the first Moon landing done by NASA or the flat earth theory or how the Sun revolves around the earth rather than vice versa. The list is long, and we can start and end this Article, writing pages after pages about these Conspiracy theories. While most of these Conspiracy theories can be swallowed with a pinch of salt, given their Naivety, others cannot be given that same leverage and need to be scrutinised and analysed correctly. For some of these theories are specifically created and weaponised to reach a potency capable of destroying the image of an entire society or even a Country. When faced with such a challenge, it becomes the duty of every citizen to bring these Conspirators to justice, and we as a Nation society must be thankful to Legal Rights Protection Forum (LRPF) for exposing one such fraud.

Meanwhile, considering all conspiracy theories that I have ever come across to this day, the one pulled off by Shibu Thomas and his Organisation, the Persecution relief (PR), will definitely go down in history as one of the most notorious Conspiracies against India and its Nation Society. The sheer extent and ingenuity of this Conspiracy pulled off by Shibu Thomas and his peers deserve applause, even from its victims. The amount of criminality that went into engineering the entire theory and building an ecosystem of fake Persecution is so massive that the whole genre of Conspiracy needs a facelift—simply assigning them off as conspirators would be an insult to the gigantic work of illusion they have done. Hence, for being the inspiration to etch a whole new genre, I dedicate the Crimespiracy as a genre to Shibu Thomas and his US company, the Persecution relief.

What is even more intriguing than the fable of fake Persecution created by Shibu Thomas is the fact about his Citizenship. While Shibu is a US citizen, his fake persecution factory is also a US 501(C) (3) entity. For those who are not familiar with the term a 501(C) (3), it can be understood as an organisation exempted from the Federal Income Tax in the US, and the suffix (3) here specifically means that it is an exclusively religious organisation with few additional attributes. To sum it up, the US citizen Shibu Thomas's US Organisation, Persecution Relief (PR), In reality, is a foreign Religious mission and works inside India through an alibi called the Abundant Life Society. In turn, Persecution Relief is an alibi of FIACONA or Federation of Indian American Christian Organisations, which is actively involved in several anti-India campaigns internationally. The symbiotic relationship between FIACONA and Shibu Thomas is sustained by the Fabricated Plot of Christian Persecution in India. It helps both FIACONA and Persecution Relief in filling up their coffers.

A portion of this Crimespiracy money is funnelled into India via its alibi, the Abundant Life Society, and under the pretext of providing relief to the persecuted, it uses this money for Church planting and other activities related to achieving their set targets on religious conversions. Another major portion of this Crimespiracy money is also used for Lobbying in the US. Many in India might not be familiar with the custom of lobbying in the US and may think of it as a voluntary or inessential act. However, lobbying in the US is a white-collar job, and countless interest groups frequently employ lobbyists to push their agendas with policymakers and even with the US Congress. These lobbyists also influence domestic policies within the US and also effect geopolitical and geostrategic decisions. According to a report published by the Atlantic in 2015, around $ 2.6 billion was spent annually by various US entities for lobbying.

Therefore it must be understood that FIACONA and Persecution Relief are pursuing an agenda involving millions of rupees, and the chances of being In cahoots with other anti-India lobby's in the US is also very evident.

Before delving into the details about the fraud of FIACONA or Persecution relief, let's understand the timeline that compelled these Anti-India lobby's backed by the Conversion mafia to create a whole new ecosystem in and around fake persecution theory, which was a complete diversion from the previous Victimhood ecosystem.

The pre and post-partition political ecosystem had largely remained hostage to the victimhood narrative that had guided and influenced most policies. There even was a time when it felt like a crime to be a member of the Majority community. Policies we so much influenced by regressive appeasement and minorityism that the former Prime Minister, Dr Manmohan Singh, was ready to divide the Nation's resources on religious lines.

However, 2014 came as a defining moment for the nation society as it realised its Citizenship and rosed beyond fractured identities. The debacle that Victimhood received in the successive polls nailed it to the wall, and vested interests groups lost an important edge in their fight for civilisational supremacy. The Victimhood ecosystem was an important control tool that gave the radical Conversion Mafia a free hand to scavenge across India, and aided by the UPA government's inaction, it gained a strong foothold in India. Conversely, in the successive years post-2014, India went through a paradigm shift, and a strong-decisive central government hammered down on multiple NGO's working against the Indian Spirit. For Eg: NGO's such as Compassion India, who were vehemently pursuing illegal conversion among juveniles, were struck down.

As the anecdote goes, necessity is the mother of all Inventions; the debacle of the Victimhood card inside India also forced these entities with a similar situation to innovate. Subsequently, the entire façade of fake persecution theory was conceived under the guidance of foreign Missions such as FIACONA. These anti-India interests groups wanted to use it as a new tool to intimidate the Indian Government (GOI) and secure compliance with their demands. The listing of India as a country of particular concern by the US Commission for International Religious Freedom (USCIRF) is a result of this scheme. The sole aim of these foreign entities, like FIACONA, is to soften GOI's stand on misuse of FCRA funds and secure a free hand for conducting illicit religious conversion of the Nation society.

What is even more concerning about these authors of the Fake persecution theory is their audacity and blatant disregard for India's law and constitution. Bloated by the ego of their success that they achieved in lobbying and defaming India with USCIRF's help, they committed a mistake that finally exposed them in their own words.

The mistake that we are talking about here is a webinar named 'FIACONA Webinar November 2020' held on 17th November 2020 and broadcasted live on their Youtube channel. Here FIACONA members and Sibu Thomas openly spewed their nefarious agenda and quickly realised their mistake and deleted their Video. However, thanks to the quick thinking of the LRPF team, they downloaded the webinar video in time and uploaded it on their channel so the world may know their true intentions.

Just 7 minutes into the Webinar, these Anti-India cahoots start exposing themselves, and it is intriguing to see how they express their intolerance to other religions without any human compassion or regards. One Mr Valson Abraham, who made the opening remarks, openly states that their supreme task is to fulfil the great commission to proclaim Jesus Christ and disciple all people (read disciple as convert all non-Christians into Christianity).

Interestingly, on the one hand, they claimed and lobbied with USCIRF and other European entities to cement the Fake persecution theory against India, and on the other hand, they bragged about how they have achieved a 600% increase in conversion of people from the Nation Society in a northern state of India, which we believe is Punjab. What came next was even more wicked, where they patted each other's back for successfully lobbying with the US state department and placing India in the top ten countries concerning Persecution of Minorities. FIACONA claimed that it was their persistent lobbying that placed India in the 14th place from the 28th place in 2015 and finally in the 10th place, and shamelessly expressed their end goal w.r.t India.

The end goal of FIACONA, Shibu Thomas and Persecution Relief is to place US sanctions against India and make India stand in line with communist countries like North Korea or China. Revelations made by FIACONA and its cohorts are alarming and must be dealt with the strongest possible measures at the Indian government's disposal. It is also evident that Anti-India lobby's like FIACONA must have covert understanding and support from India's enemy states like Pakistan, Turkey or even China, for that matter. Subsequently, during Shibu Thomas's presentation about Persecution Relief in the said Webinar, Shibu also gave away some intriguing details about the influences and breakthrough he has received in India. Mr Shibu gave away details about how he received help from Mrs Sonia Gandhi, how he successfully convinced Hemant Soren to withdraw the Anti-Conversion law from Jharkhand at the earliest possible date and why tribals must not be categorised as Hindus. Hemanta Shoren, the incumbent CM of Jharkhand's recent comment that tribals are not Hindus, must be ascribed to the nefarious lobbying done by the FIACONA agent in India, Mr Shibu Thomas.

However, one last piece to the puzzle was constantly bugging me I;e how are FIACONA and Mr Shibu Thomas generating these fake reports on Persecution. But, thankfully, it didn't took long, and a few more minutes into his presentation, Mr Shibu Thomas provided a detailed description of their elaborate mechanism in place to generate these reports. Firstly they created an intricate network of 300 plus WhatsApp groups with more than 50,000 plus members spread across India's length breadth and aided by like-minded radical proselytisers and evangelists. Next, they created a toll-free number where they would frequently feed fake persecution stories, followed by recording them and presenting them in the annual reports. Lastly, FIACONA and other such entities would use these forged data to lobby against India and intimidate them into accepting their illegal demand. It is high time that we as a Nation society rise up to the Fraud of Mr Shibu Thomas and FIACONA, who are hand in gloves with our enemy Nations and who's only dream Is to defame India, Intimate the democratically elected government and destroy the Nation Society and harvest its souls. The Nation Society has persevered hundreds of onslaughts for thousands of years and is very well equipped to thwart this Onslaught.